Mother’s Day is a wonderful time to appreciate moms, step-moms, birth moms, adoptive moms, wanna be moms and women who love children. Bless you for making a difference in a child’s life! Don’t you get joy from seeing the joy in a laughing child, the shy smile of a child with twinkling eyes, and the serene look on their faces when they are sleeping?  Ahhhhhh……..what sweet little rewards of being with a child…

Most of us know, however, that it is VERY difficult to be a mom and sometimes the REAL rewards are far apart….

When my son Steven was in nursery school, it was a real challenge because of his autistic and ADHD problems. He had been born addicted to cocaine and heroine and his nervous system was “messed up” (my professional diagnosis.) Bringing him was a real challenge as he would kick and scream and cry, yet I did it because he could not hide out safely at home for his entire life with me vacuuming around him. At first, he would  spend most of the time in school hiding out in the “quiet tent”, playing with his plastic reptiles, sometimes soaking in the information from the teacher. Eventually, he sauntered out of his safe space to see what was going on.  He did not join the other children, but he was with them…a huge improvement.  Eventually, nursery school became normalized for him; part of his routine.  He would come home with his little projects; a paper flower, a painted snake, a play dough alligator.  I had learned not to make a “fuss” over these things, but to quietly tell him they were wonderful while his head dropped to his chest, eyes closed.  (He was not a child who could tolerate excitement of any kind.)  He survived two years in that classroom, and I wondered how he would act on “graduation day”, a celebration seemingly out of his tolerance level.  All of the children stood there in their little paper graduation caps, tassels dangling in front of their noses so they had to keep blowing them away.  All of the children except Steven.  The children sang a song, and thanked their moms and generally wowed the crowd with their antics.  All of the children except Steven.  The children walked in a nice, straight line to get their nursery school diplomas; all except Steven.  When all but one diploma had been handed out, the teacher walked over to where Steven was hiding under a chair, butt facing outwards. (If I had been smart, I would have sewed a smiley face on the butt of his pants, but, alas, I had been unrealistically hoping that he would join the other children in the graduation ceremony.)  The teacher bent down with the document and Steven’s  little hand reached out to grab it.  He quickly pulled the diploma out of sight.  Calm and cool under the seat, he had made it! Steven had graduated from nursery school without a tantrum, yelling or screaming.  He graduated in the manner he felt most comfortable, but graduate he did!  What a reward that was for me; I was a proud mother, indeed!

Diagnosed in elementary school with Dissociative Identity Disorder, Angel, has been very carefully placed in specialized classrooms.  Although intelligent and able to do grade level work, he frequently changes “parts”, (his word for his alternate personalities.)  His teachers and teacher aids, bless their souls, understand him well, and manage to educate him, even if it means repeating the same lesson because a different “part” was out that day, or giving his the test over because the “part” that studied for the test is not the “part” that took the test!  He has a baby part which necessitates him to just “veg out” in a large mushroom chair.  On those days, nothing was learned.  His condition has been kept top secret and no unnecessary teachers or others in the school know about it. Fortunately, he has been living a very “normal” life.  I have found one surprising benefit…he has a “Game Show Host” part.  I work with a recreational group of adults with disabilities, and every now and then we play Bingo or Family Feud. Angel, as have all of my children, regularly comes with me.  One day, he asked to be the moderator for Family Feud and his “performance” was beyond hilarious.  Usually a reserved child with groups, all of a sudden he channeled Richard Dawson! He went down the rows of “contestants”, gave each of them a peck on the cheek, and, while holding their hands in his, asked their names and a little about themselves.  The older women, who probably have not had much attention in their lives, giggled and smiled and blushed.  Then, Angel read each question with gusto, and made a “ding” noise when they got it right, and a loud buzzer noise if they got it wrong.  It was sooooooooooo funny because it was so out of character of the Angel that they knew.  This group of adult with disabilities, many of whom live alone on a minimum income with this once a week outing their only time out of their houses, were laughing hysterically that evening. Ever since then, they look forward to Family Feud and “Gameshow Host” Angel! What a reward for me to see Angel’s  give such joy to these wonderful people!

As a graduation present, my daughter, Dinora, and I took a trip back to her birth country in Guatemala.  She had done fundraising to assist with the opening of a soup kitchen in Antigua, and we were there for “opening day”.  We went shopping that morning, taking a little “putt putt” (2 wheeled open air taxi) into the village, giggling all the way as it bounced along. We bought flowers of all bright shapes and sizes, which stuck out of the putt putt on the way back, narrowly bopping passers by on the head. We spread the flowers out in front of  the  alter where a mass was to be said in honor of the opening of the facility. An overflowing crowd of people filled the make-shift pews, and it was a beautiful, emotional mass. Even though it was all in Spanish I seemed to understand every word, and I could certainly feel the emotion in the songs which the Indigenous Guatemalans sang.  After mass, people lined up for the food in their brightly colored clothing. There was my daughter, a young adult, behind the counter, dark hair pulled back into a pony tail, serving food with a beaming smile on her face showing dimples I never knew she had, (or perhaps she had never smiled so brightly.)  She was old enough and cared enough to give back something and help “her people” as she called them. I will never forget the sight of her…sweat on her brow, wiping her hands on her apron, making pleasant conversation in Spanish while smiling that amazing smile…   How could that sight NOT be a reward for a mom after years of raising a difficult teen?

Raising Marie has been the most difficult because of her many serious challenges.  When she came to us, she was street smart at the age of seven.(See post “All She did Was Scream and Say No! No! No!) She had no thought of danger and no social skills.  Although this may sound silly, one of my concerns was the fact that she would litter.  Get a drink; throw the bottle on the ground.  Have a piece of gum; throw the wrapper on the ground. Popsicle; stick thrown in the grass.    Repeatedly, I would have her pick it up and throw it away, explaining that we don’t litter in our family.  Marie could not have cared less…she did not want to be in our family anyway…  It took many months with us before she learned not to litter.  That’s why it shocked me when we were at the mall one day and she casually flicked the paper from her straw onto the ground.  My eyes widened, and just as I was about to ask her to pick it up, she bent down and picked it up, signing to me “I was just teasing you!  I know we don’t litter in this family!”  What a reward it was to hear her say that!  Finally, she felt part of our family!

My most favorite reward I saved for last.  For all of you parents, especially parents with children with disabilities, I will share that there has been no greater reward in my life than seeing my son, Francis, become a successful adult. Despite being legally blind, he has a college degree, is very successful in a job which he loves and through which he is benefitting others, and he recently married a great woman who not only loves him for the wonderful person that he is, but can also drive a car so he won’t have to take public transit to work any more!  There IS no greater reward for a parent; to know that the problems, fun, hard work, love, difficulties and dispersed joys of childhood have come together in a positive way. My son has officially “made it” to adulthood.  Now he can look forward to the rewards he will experience in raising his own children. Then I get the extra rewards of grandchildren!

To all of you mothers and others out there, Happy Mother’s Day!  Beyond the handmade cards, the flowers, the breakfasts and dinners out, and the gifts of the day, so many more rewards await you.  Sometimes you just have to be patient…

Another Daughter to Celebrate!! 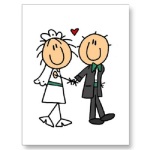 For those who know me, you may be sure that I am referencing a new foster or adoptive child. Not this time! This time, my new daughter is my son, Francis’, new wife.  She is wonderful and sweet and recently blew me away with the Mother’s Day Card she sent.  Separate from my son’s, she sent a beautifully designed Papyrus’ Mother’s Day Card with 3-D flowers and a lot of sentiment.  But the sentiment that was most important was what she wrote inside; “Thank you for being such a great mom and raising such a wonderful son!”  Isn’t it thoughtful?  I now officially have another “daughter” and she’s all grown up.  I didn’t have to  do a thing…