Mothers, Help Your Sons Grow Up to be Fathers… 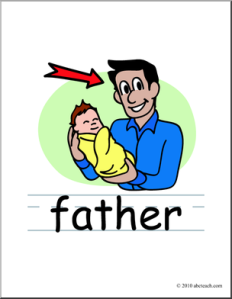 My oldest son, Francis, grew up amongst a caravan of foster brothers and sisters. Specializing in newborns and infants who had been affected by prenatal drug exposure and addiction, our family was usually comprised of my husband and myself, Francis, his sister, Dinora, who had been adopted from Guatemala, and one or two foster babies. Despite the fact that Francis is severely visually impaired, he played an active role in child care, frequently holding a little one, feeding a bottle and changing diapers. When going to the mall, he and his sister would proudly push the double stroller. (With the 2 of them, he could be a pusher without having to see where he was going…) Throughout his childhood, sixteen foster babies lived with us, and caring for them was just a fact of life.

Francis is now an adult with a Ph. D. from Cambridge, a well paying dream job, a wonderful wife and a cozy home complete with a grill for grilling steaks and a lawn to mow. And, as of three weeks ago, a newborn baby. My week spent with his little family renewed my faith in the power of what is learned in childhood. Without even knowing it, I had trained Francis how to be a good father! He bundles his little girl up in a baby blanket, like I had bundled up those babies who were going through withdrawal. Newborns like being in a tidy bundle because they arrive with strong startle reflexes and without much control of their arms and legs. By pulling her arms and legs in close and securely wrapping a blanket around her little body, baby India can feel safe and secure. When she is awake and alert, Francis rocks her and sings songs to her, songs that he heard me sing so many years ago: “Itsy Bitsy Spider”, “Hush Little Baby,” and “The Wheels on the Bus Go Round and Round”. Even though she couldn’t possibly know the songs, the sound of his voice quiets her, and these songs are easy to sing. When he is expertly changing her diaper, he plays “This Little Piggy” with her toes, gently pulling her feet to his mouth to kiss. He exaggerates the “wee wee wee home” by tracing his finger from her toes to her chin, tickling her slightly before kissing her forehead. And while she sits in his arms on the couch, ready for bed, he reads her books with very large print; “Goodnight Moon”, and “Five Little Monkeys Jumping on the Bed”.

On the evening before I left to fly home, he looked over at me and thanked me for giving him the opportunity to practice on all those babies years ago. All of his friends are having babies now, he said, and they are all in a tizzy. Because of the practice HE had, he is a confident parent and not at all nervous with India. I realized that by being a foster parent to infants, I was not only caring for little ones, but also nurturing parenting skills in my oldest sons, skills that will ensure he will be an awesome father!

I have repeated this post from last year. His adorable baby is now a year old, and his father’s day skills have continued to flourish!

***********
If you are interested in reading other stories about Francis, please purchase my book on Amazon.