And I was WORRIED about My Daughter’s First Date; Silly, Silly Me! 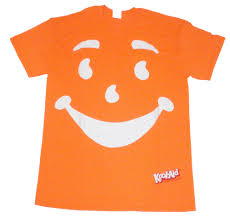 Marie is a teenager who has had her eye on both boys and girls for a possible boyfriend or girlfriend for several years, with no actual luck finding anyone. We had “the” talk a while ago when she asked me if she should like boys or girls. Knowing her proclivity to try to dress like a boy due to her early childhood abuse, I told her that whether she had a boyfriend or a girlfriend would depend on who she wanted to have sex with when she was an adult. SEX? She looked at me in astonishment! She didn’t ever want to have sex with anyone!!!

Even though she vehemently denied ever wanting to get intimate with anyone, I still had a knot in the pit of my stomach when she went off on her first date with a guy she knew from a previous school. She wore her bright orange Kool-Aid guy t-shirt, which I had suggested she change. (She is quite stout, and actually looked like the Kool-Aid guy in that shirt!) She felt she looked fine, taking no interest in looking good for Carl. When he came to pick her up, they easily chatted in sign language, having not seen each other for about 3 years. She told me they were going out to dinner and I asked if she needed any money. She looked at me incredulous. Of COURSE she didn’t need money, Carl was going to pay! I asked them what time they would be home. They looked at each other quizzically and Marie finally signed “11”. And off they went.

Being the opposite of a night owl, I plopped myself on the couch in the living room with lots of caffeinated Diet Coke to keep me awake. Because I don’t have a lot of free time to watch tv, it was nice to enjoy Netflix and The House of Cards. After only an episode and a half, home came Marie! I asked her if she had a good time on her first date. She was non-committal. She said she enjoyed eating dinner and talking to him, but they didn’t know what to do after that and it became boring, so she came home. That’s my girl, Marie!!!!