Even the Wrong Way can Turn Out Right 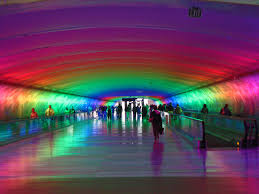 Even though our winter hasn’t been too bad in our neck of the woods, the lure to see a friend who lives in Florida was strong non-the-less. The day I left to visit her it was 57 degrees in RI, the same temperature it was in Tampa.
My first flight was to leave at a grueling 5:30 am, and I dutifully showed up at the airport at 4:00 am. The need for such an early arrival escaped me, as the airport seemed almost deserted except for the looooooong line of people waiting to check in at Southwest Airlines. Having printed my own boarding pass and with no luggage to check, I made my way to the security line where I was ushered into the ”pre-check” line generally reserved for the elderly and disabled. Miffed to be considered eligible for this line, I was also disappointed to miss the titillating experience of the full body x-ray machine, but keeping my shoes on was a good compromise.
Without much airplane booking experience, I had not realized that my first flight was a commuter flight to Detroit, which seemed to be a ridicules way to get to Florida from New England. The plane was pretty tiny on the outside, and seemed to be even smaller on the inside with a low ceiling and seats two by two on either side of the skinny aisle, through which I had to turn sideways to make it to my seat. Sitting next to a stranger, I had to keep my arms crossed at my chest in order to avoid touching his arm that had commandeered the arm rest. Positioning hardly mattered as, characteristically, I fell asleep as soon as the plane took off, getting nudged awake when we landed. Also characteristically, the next flight was taking off from a gate far, far away. As I watched others heading for their connections, women my age running clumsily, hair flying behind them, carry-on suitcase clunking along, I was grateful for my two hour layover. Slowly making my way along the “moving sidewalks”, it was enjoyable to just stand to the side and window shop the many stores along the concourse without moving a muscle. Who knew that Porsche sold suitcases and pocket books! The Dylan Candy Store looked like one big Hello Kitty ad. And if I wanted to buy golf pants, now would be the time to do so as the PGA Golf store had them for half price.
For the tunnel from one side of the airport to the other, I was pleasantly surprised by an unusual artistic endeavor. The walls of the long tunnel seemed to be made of stained glass with ever changing colors, synchronized to peaceful, beautiful music. As I rode on the walkway, my heart subconsciously rose and fell with the wave of the music, calming me throughout the long trek. This experience rivaled anything that could be found at Disney World or other Floridian tourist attractions. And it was found in Detroit! By the end of the tunnel, my heart was thankful for the amazingly emotional performance, and I was no longer upset that I had taken a commuter flight.