Archive for the ‘crosswalk’ Category 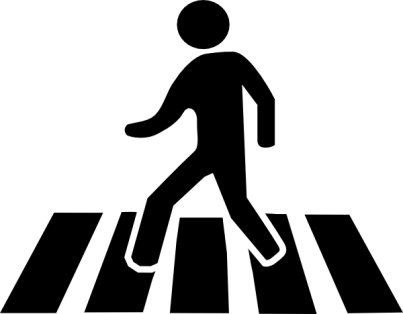 My son, who lives and works in Silicon Valley, delights us in discussing the progress of Google’s “cars that drive themselves”, which can regularly be seen toting along the streets in his neighborhood. Being blind, he has a special interest in this new technology, (although UBER has provided a suitable stop gap in the meantime.) A report on the self-driving cars shows that in the history of trials, there have been 4 accidents; 3 were someone else’s fault and 1 was the car’s fault, but technically the car was right.  Because it had been programmed with the rules of the road, the car was following the law, but it was a law Californians routinely break and of which the programmed car had no knowledge. Currently, the Googlers are working on programming the car for these types of idiosyncrasies.

My car, which routinely FOLLOWS rules, almost caused an accident this morning when fellow Rhode Island drivers followed their own rule idiosyncrasies; IGNORING CROSSWALKS. Somehow it appears that most drivers think their CARS have the right of way and the white stripes on the ground are decorative, not meaningful.

A lovely, older woman, clinging to hold her coat shut against the frigid air, gray hair flailing about in the wind, was waiting on the curb in front of a crosswalk.  Drawn in at first by the sight of her, then by the crosswalk that loomed in front of her, I stopped my car. The car behind be, which had been tailgating, came within a hair’s breadth of hitting me, evidenced by the car’s screech and swerve up onto the curb, sounding it’s horn so loud I thought it was foggy and I was a boat in the bay. Once that car had settled with one wheel on the sidewalk, the startled woman boldly took a few tentative steps in front of my car to begin her crossing adventure. She stood in front of my car while 1,2,3,4,5,6,7,8 cars quickly passed by without pausing at all and the fog horn sounded again behind me. Finally, the 9th car stopped after he had correctly slowed down seeing the crosswalk.  Looking over, I saw the driver smile and motion for the petrified woman to continue to cross.  She tentatively shuffled her little elderly feet in front of him. Coming from the other direction, and with advance observation of what was happening in front of them, the cars in the opposing 2 lanes stopped to allow her to successfully complete her daring adventure. She shuffled more quickly, head down, hair flying, coat flinging open. When she triumphantly stepped onto the sidewalk on the other side, my heart, which had sunk into my stomach, slowly rose to its normal position. On my way I went, encouraged on by the sound of the fog horn once again.

The near miss accident intrigued me.  Have I gone the way of the Google self-driving car which follows the law but can still cause an accident?  Or was everyone else who didn’t stop following the way of the recalculated Google self-driving car which make accommodations for laws which are routinely broken? Either way, my assumption was the driver-less car would have been more observant on obeying a law which allows a frail, grandmotherly type woman to live a few years longer by allowing her to cross the street safely.