It was Like Playing Leap Frog, but I Didn’t Get to Leap! 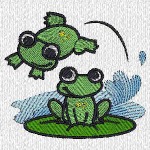 I just returned from a four hour trip that should have taken me only two hours.  The day started out wonderfully enough…I drove up to see Marie and take her fishing. Last week she had birthday money and we spent two hours perusing through Dick’s Sporting Goods to get EXACTLY the right fishing pole, strong fishing line, (in case she catches a shark or something similar,) bobbers, lures, hooks and pretend “bait”  (yeh…like worms are really green with black speckles…)  I am pretty naive when it comes to fishing;  we live on a pond with tons of fish, so therefore all bodies of water have fish.  Driving around Marie’s school, we settled on a nice fishing spot that had some large rocks for sitting and many trees for shade.  It turned out we didn’t need shade for long because it became overcast and VERY cloudy, then began to rain.  This didn’t phase Marie, who is known for 4 season, all weather fishing on our pond at home.  Although drenched, she patiently fished, changing bait and lures several times to try to attract the appropriate fish for the area.  Although no fish saw fit to chow down on her line, fun was had by all. She was convinced that the fish could look up through the water at her hulking body and swam in the other direction.  She vowed to next time dress in camouflage gear. (It was only later that I learned that that particular “lake” was actually the drinking water reservoir for the area…no fish…and I was darn lucky all she was using for bait was plastic worms and tin lures!  EWWWWW if it was real worms!))

After dropping Marie back off at school, it started to pour out.  My good ole van isn’t always so good. In fact, it has an electrical short whereby if it gets splashed with water, the engine shuts off.  (It’s one of those things I should have had fixed, but WHO has the TIME?) If the engine has a constant flow of gas, it works okay even if it is wet.  However, if it slows down and there is no gas getting to the engine AND it goes through a puddle, the engine just stops.  Fortunately, I can hear when it happens AND the car keeps rolling on, so I have time to pull over to the side of the road into the breakdown lane.  Being in rush hour traffic AND in a torrential downpour wrecked havoc on the ride home.  When stopped in traffic, I’d put the car in “neutral” to be able to give it gas, shifting to “drive” again once the traffic started to move.  Of course, this did not always work, and often the engine would shut off and I would have to pull over again.  Although the traffic was very slow moving, and as far as I could tell my pulling to the side of the road neither inconvenienced nor blocked anyone, it was amazing the number of cars that would lean on their horns at me.  If I were paranoid, I’d think they were upset…but instead I just smiled and waved. What nice, supportive drivers! Fortunately, the car always started up again, and I’d pull back out into traffic, doing the “neutral”/”drive” dance in hopes that it would keep running. It didn’t.  Time and time again, lengthening the drive home to four hours, I’d pull over to the side of the road, and cars would pass me.  It was like playing leap frog, but I never got a turn to leap…

To read more about our life, here is a link to my book:

Link to the Readers Digest review of my book:  http://www.rd.com/recommends/what-to-read-after-a-hurricane/

I Wonder How My Name is Pronounced in Chinese